The Retirement Ceremony for C3C Nishanth Kalavakolanu was held on February 25th at the Polaris Hall Main Forum. Cadet Kalavakolanu retired from the Air Force due to medical reasons.

Cadet Nishanth Kalavakolanu is from Austin, Texas and is currently retiring from his second year at the United States Air Force Academy. Cadet Kalavakolanu is an Operational Research major, in this major, he learned about problem-solving and how to make systems more efficient.

Cadet Kalavakolanu also studied Japanese at the Academy and while pursuing a minor in the language. Cadet Kalavakolanu is a member of the Academy’s Six SIGMA Group where he and his team assume the role of increasing the Mitchell Hall Staff’s efficiency as part of his training to embrace the data driven approach outlined by the organization.  As a doolie, he participated in the venture capital competition hosted by Google where he led the United States Air Force Academy to a third place finish.  Cadet Kalavakolanu joined the select few who attained both honors of the Dean’s List and Ace’s List (Straight A’s).  He was very active in his cadet squadron where he held the position of an Academic Clerk.  He was responsible for developing a means for the members of the squadron to aid each other based on respective majors and academic strengths.  During the summer of 2018, he earned his glider solo wings and was selected to upgrade to become an Instructor Pilot.  Cadet Kalavakolanu is an avid rapper and enjoys using his talents to lighten up the mood amongst his peers.  He also enjoys studying and playing jeopardy.  He was actively preparing to represent the United States Air Force Academy in the Jeopardy College Championship. 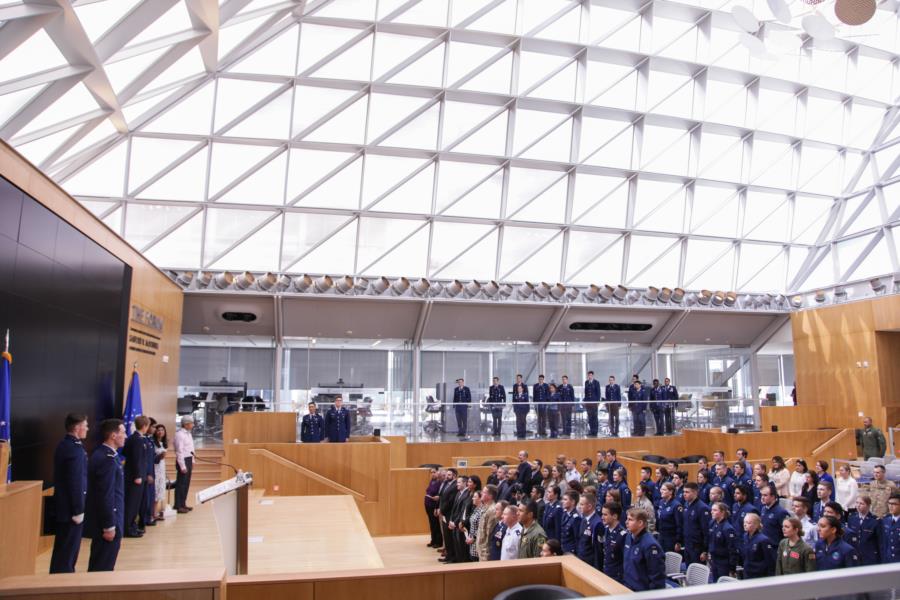 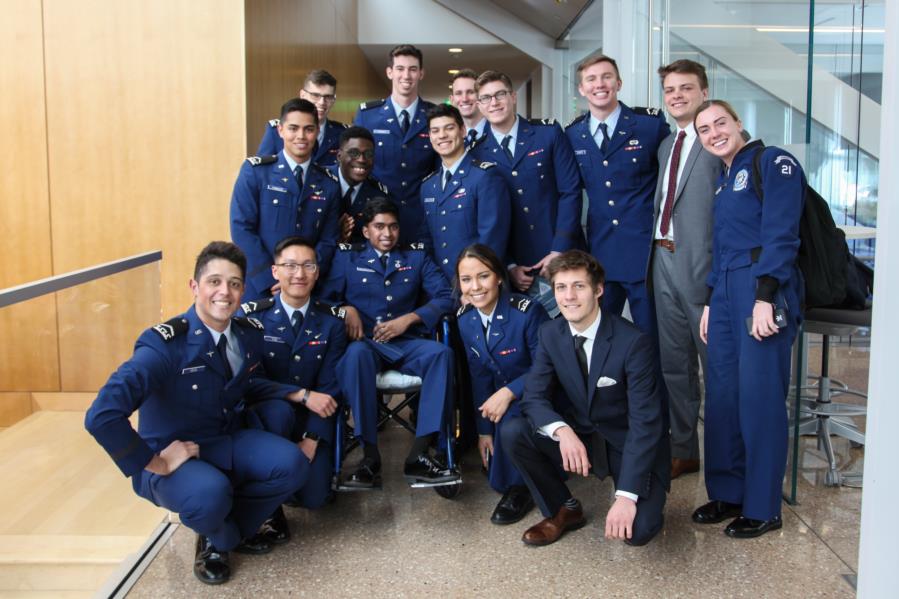 The Presiding Officer for the event was The Commandant of Cadets Brigadier General Kristin E. Goodwin.  General Goodwin had great things to say about the talented and brave Cadet Kalavakolanu. 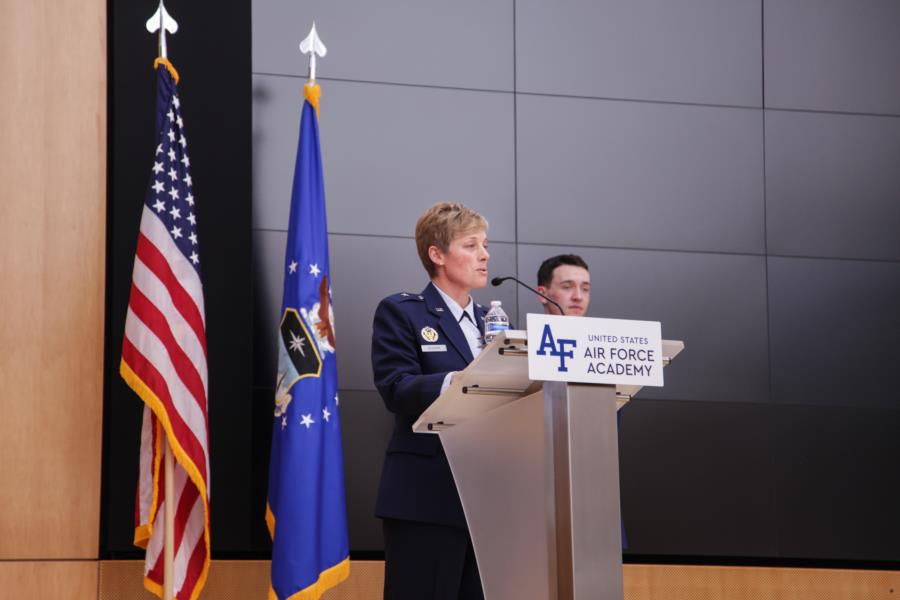 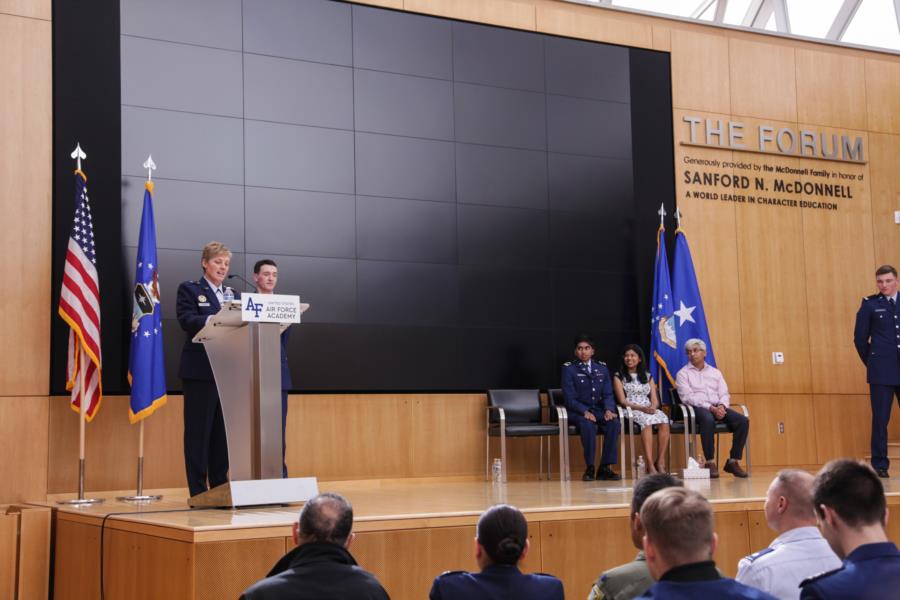 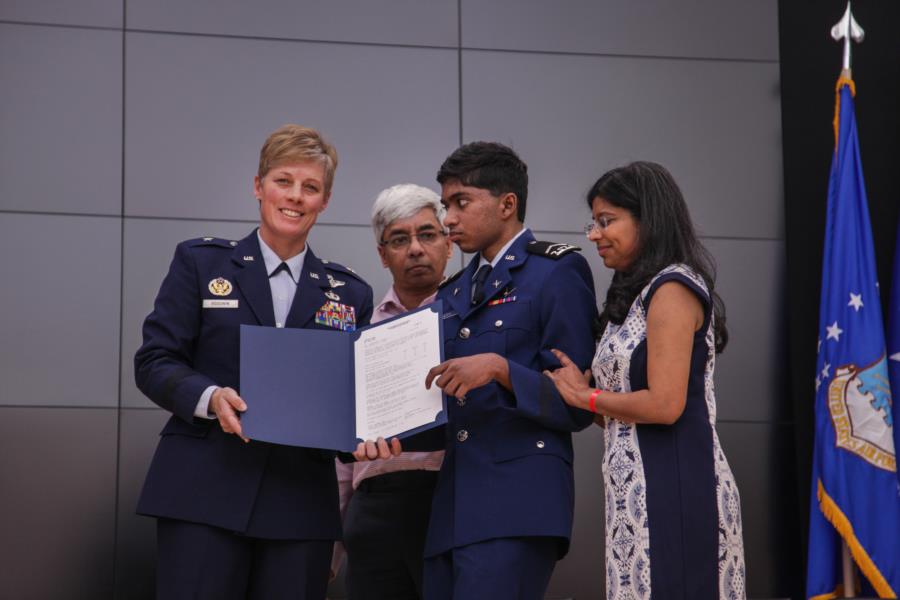 General Goodwin presented Cadet Kalavakolanu with a Certificate of Retirement from The Armed Forces of the United States of America, which honors his 21 months of dedicated service. It Reads:

To All who shall see these presents, Greetings. This is to certify that Third Class Nishanth Kalavakolanu, having served faithfully and honorably, was retired from The United States Air Force on the 25th day of February Two Thousand Nineteen. 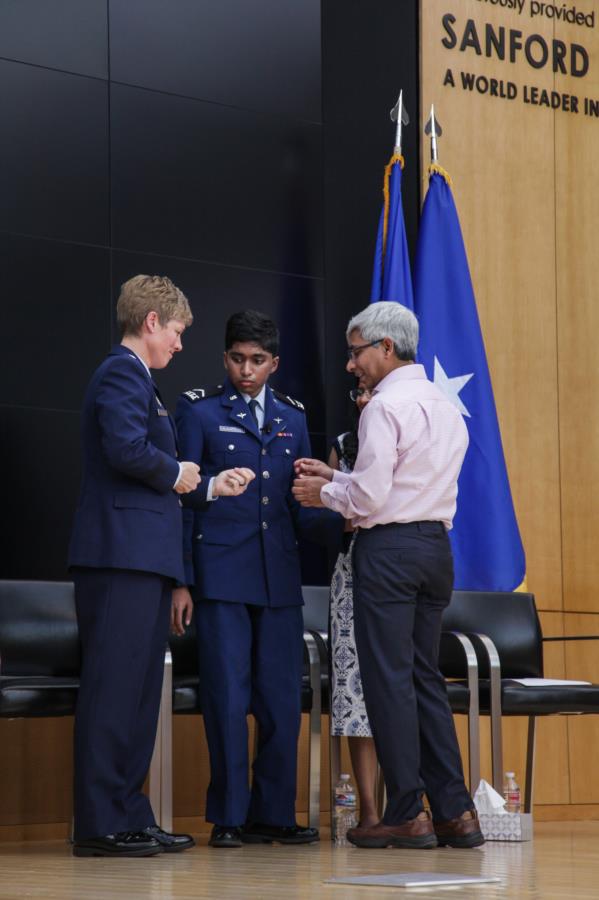 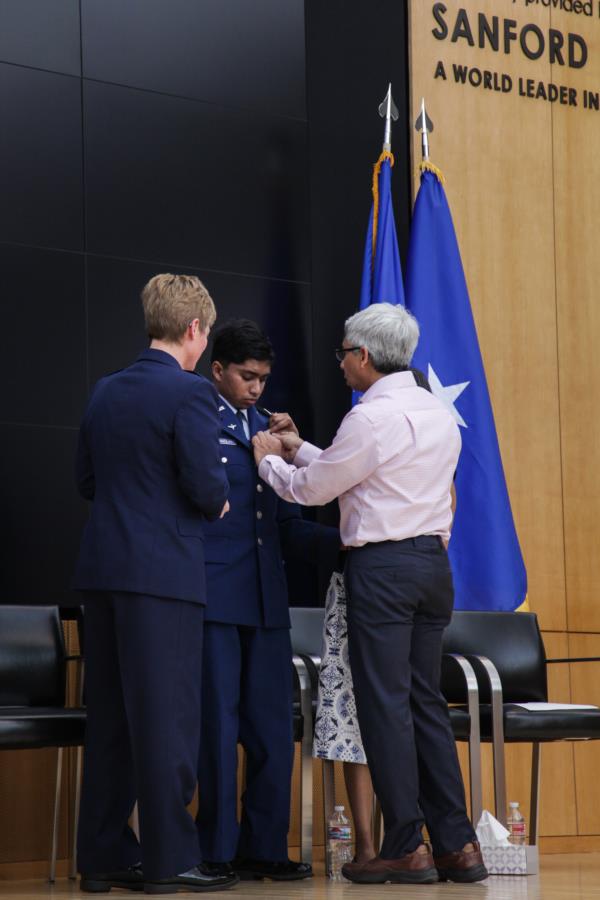 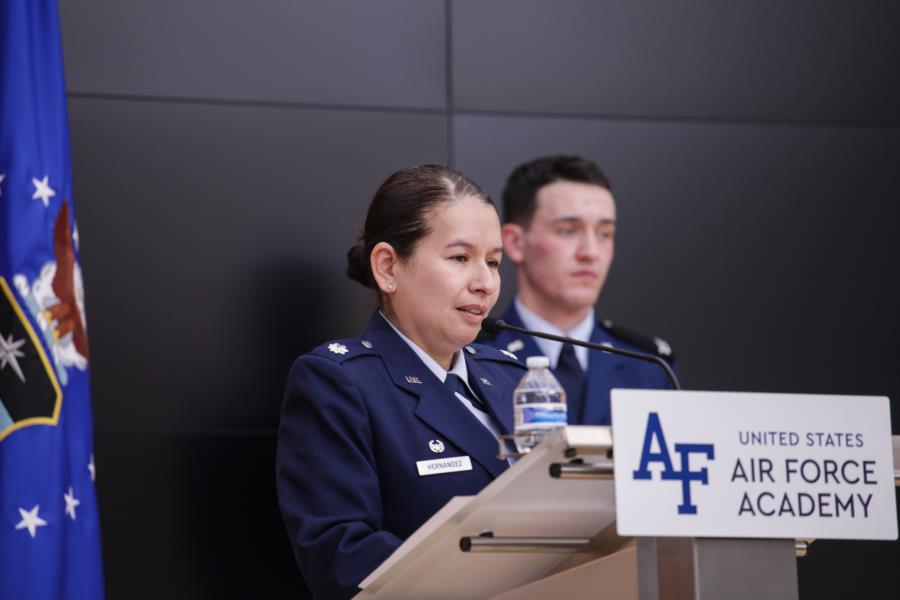 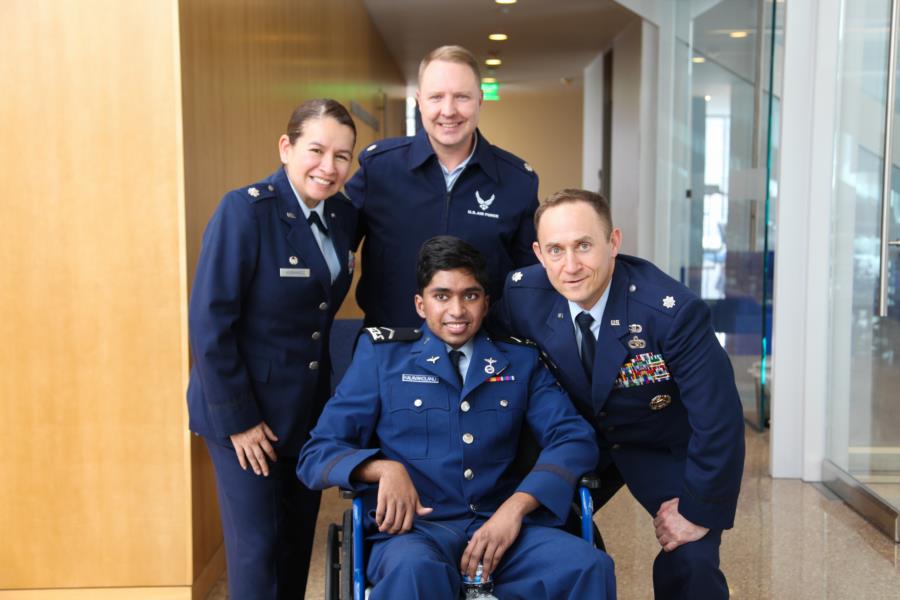 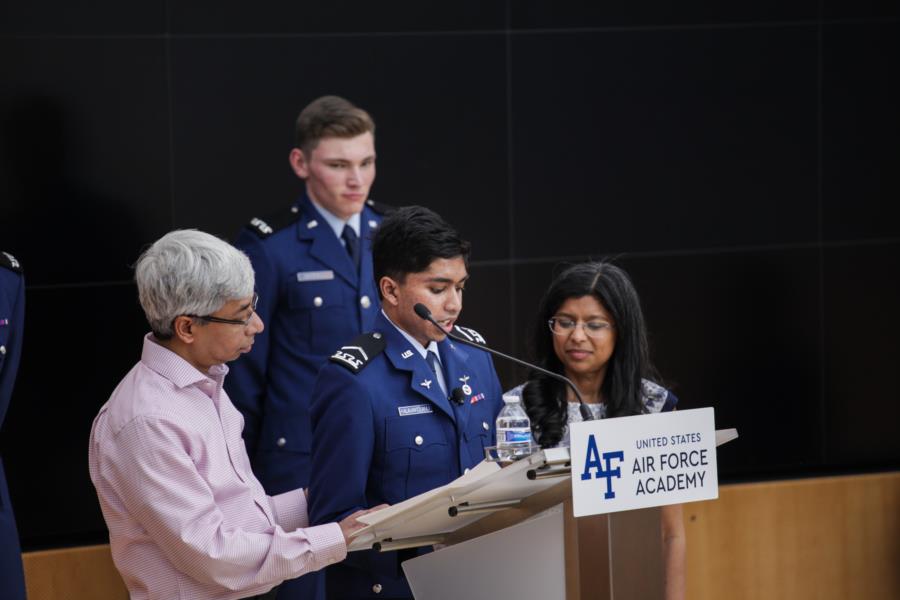 Cadet Kalavakolanu gave an inspirational speech about his time at USAFA and spoke about his road to recovery. He thanked his parents, family, his Squadron Cadet Squadron 20, USAFA and his doctors for their support. This was followed by a short video presentation for Nishanth. 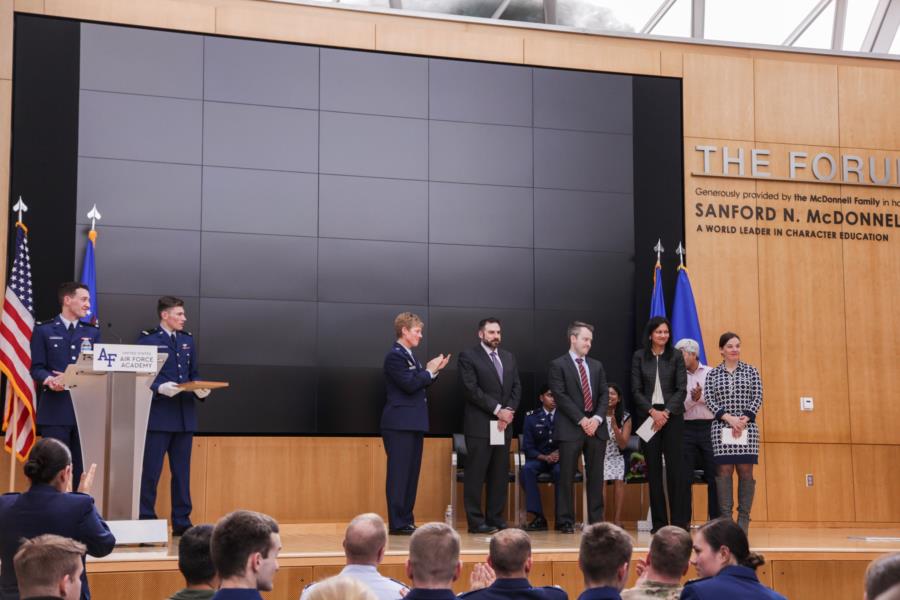 Cadet Kalavakolanu’s recovery would not have been possible without the tireless efforts of his medical team and neurologist, Dr. Craig Press. For his support of Cadet Kalavakolanu, General Goodwin shared a letter of appreciation to Dr. Press, Dr. Brad Constant, Dr. Kelley Lockhart and Dr. Sunita Sharma.

Our sincerest of congratulations to Cadet Kalavakolanu and his family on Nishanth’s retirement.   We wish this strong, brave, inspirational young man on his future recovery and endeavors.

To view the rest of the pictures of Cadet Third Class Nishanth Kalavakolanu’s Retirement Ceremony go to Galleries > Extracurricular > Special Events. Or click the link below.