Got Ya!  This isn't about "The Bird".  It's about THE bird.  The Official USAFA mascot. 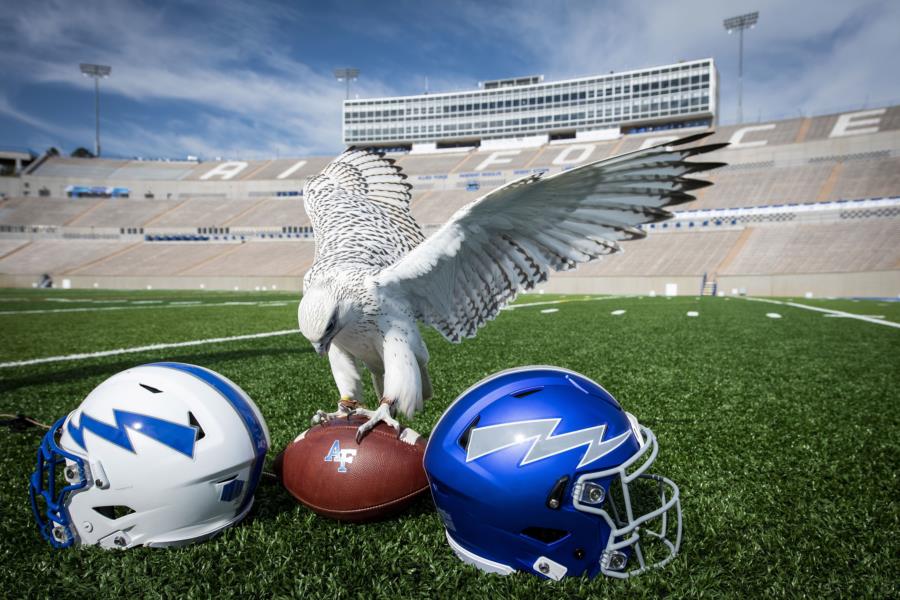 Now that all the BCT squadrons have returned from Jacks Valley and we approach the final week of BCT, we thought a bit of USAFA heritage would be a change of pace. Let's all catch our breath.   Next week's supplement will talk about Acceptance Day, Doolie Day Out, and the Academic Year.   Today it's about falcons.  The feathered kind.

The Air Force Academy mascot, the falcon, has intrigued sports enthusiasts across the U.S. for six decades. Trained and handled by cadet falconers, these birds soar and dive and often zoom low over spectator’s heads.

While their public performances are limited to outdoor venues such as football games and Cadet Wing parades, the falcons appear at many cadet athletic competitions and other USAFA events.  Many of you will see them in action if you attend the Acceptance Day or Parents Weekend parades.

The Class of ‘59, the first class to enter the Academy, chose the falcon as the Cadet Wing mascot Sept. 25, 1955, as they believed it best characterized the combat role of the Air Force. They didn't specify a particular species, so any falcon can serve as mascot.

Some of the characteristics leading to its selection were: speed (Falcons can stoops or dive at 200 mph); powerful and graceful flight (the falcons’ strong and deep wing beats allow them to maneuver with ease); courage (falcons are fearless and aggressive and will fiercely defend their nest and young against intruders. They've also been known to attack and kill prey twice their size); keen eyesight (approximately eight times more accurate than a man’s); alertness; regal carriage; and noble tradition.

Though they belong to the hawk family, falcons differ as they have long pointed wings and dark eyes. Five species of falcons are native to North America and range in height from two feet to five inches: the Arctic Gyrfalcon is the largest; the Peregrine Falcon is also called the "duck hawk"; the Prairie falcon; the American merlin, or pigeon hawk; and the American kestrel, also known as a “wind hover” or a sparrow hawk.

Falcons have been trained throughout the ages, typically for hunting. Many countries and states have legislation to protect the falcon, including Colorado.

A Peregrine falcon was the first falcon to be presented to the Cadet Wing, Oct. 5, 1955. It was named "Mach 1," referring to the speed of sound. "Mach 1" remains the official mascot name, but each bird receives an individual name from the falconers.

The Academy has had White Morph Gyrfalcons represent the Cadet Wing. Previous Gyrfalcon mascots were “Atholl” and “Pegasus,” later renamed “Baffin.” “Baffin” got her name from Baffin Island in the Arctic Ocean where she was captured with the permission of the Canadian government. Captain Richard Graham presented her to the Academy Nov. 20, l965, as a gift from the 17th Air Force. “Baffin” died April 7, l978 at the age of 13. She appeared at all home football games and many other Academy events and on several TV talk shows. The Academy’s Association of Graduates commissioned wildlife painter Donald Eckelberry to render her likeness for posterity in 1977.

“Baffin” was restored by taxidermist Don Bowman and presented to the cadet wing by David Merrifield of Wildlife World, Monument, Colorado, Aug. 8, 1979. She’s on display today in Arnold Hall. 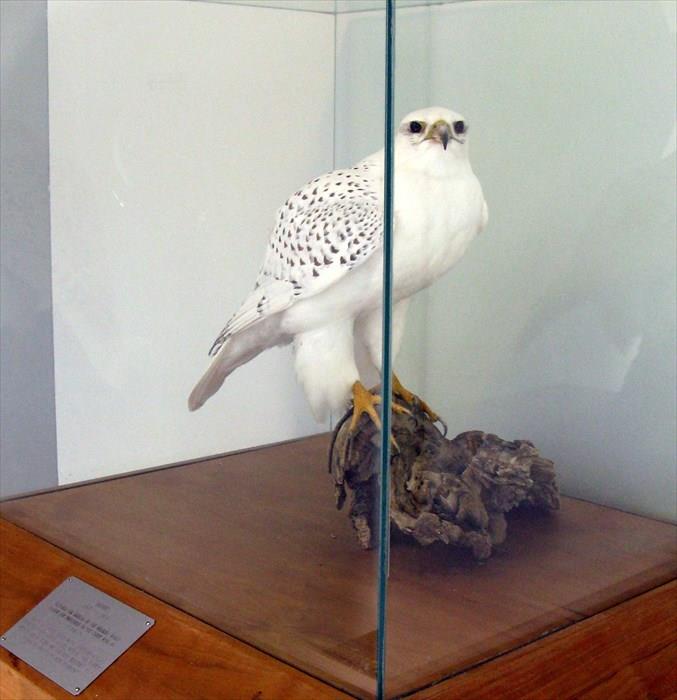 Since July 1980, the Cadet Wing has had other White Morph Gyrfalcons to show the public. The latest in the line is "Nova".  Below is her baby picture.  (Kind of like your kids on I-Day.)  Just like her predecessor, Aurora, who served as mascot for nearly 23 years, Nova will interact with people at sporting venues and military and community events. In addition to serving as an ambassador for the Air Force Academy, she will be an ambassador for all falcons, helping to educate the public on the importance of these majestic birds.

The USAFA Class of 1995 led the efforts of nearly 200 donors to contribute more than $20,000 to acquire the new gyrfalcon and further support the Cadet Falconry Club. 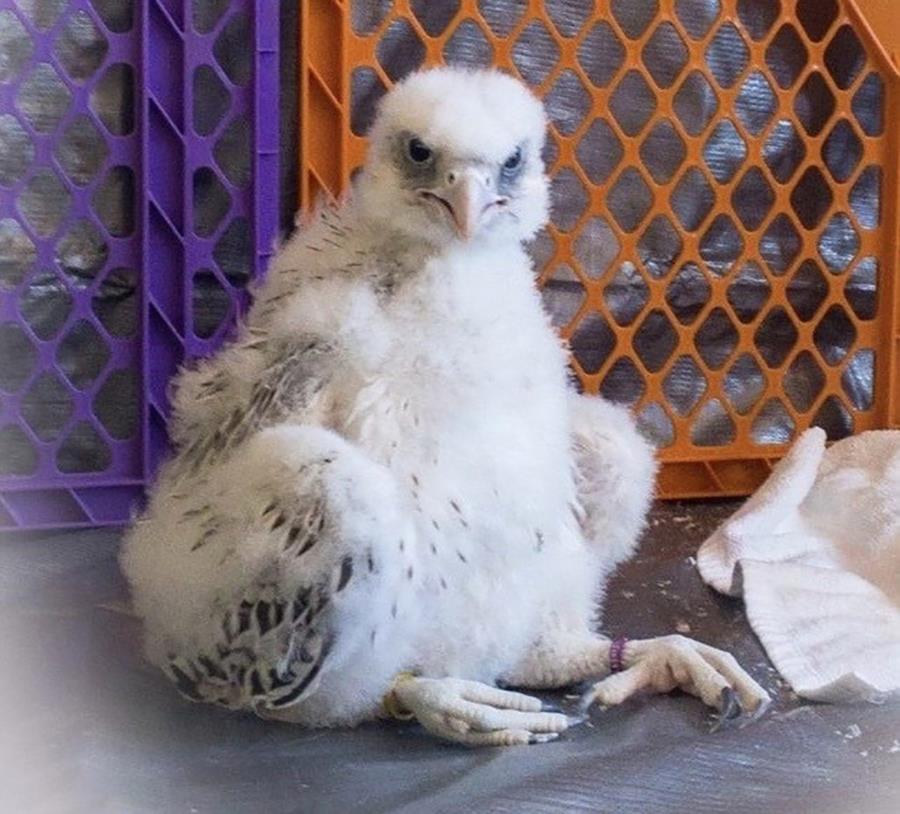 Experts once believed falcons could not be trained to perform before huge crowds; it was thought they would panic and flee. Since 1956, however, the birds have performed at sports events before thousands of cheering spectators.

Falconry is one of the many extracurricular activities offered to cadets. There are usually 12 falconers, with four chosen from each new class at the end of the year to replace graduating seniors. The new falconers begin training in January under the leadership of experienced upperclassmen. Falconers' duties include daily checks of each bird's health and condition, training sessions during which the birds are fed a measured ration of meat, cleaning and routine maintenance of equipment.

Permits from the U.S. Fish and Wildlife Service and Colorado Division of Wildlife allow the Academy to breed captive falcons. Since 1974, most birds used for public exhibition have been hatched in the Academy breeding project. Due to the success of the project, birds’ have been transferred to agencies for use in educational programs dealing with raptors (birds of prey) or trained to hunt and released into the wild. Annual reports on all falcon program activities are submitted to state and federal wildlife conservation agencies.

Cadet falconers in flying demonstrations use peregrine prairie and gryfalcons. Weather permitting, the birds fly throughout the year to keep them in top condition. Between May and October, when the birds molt, the training is minimized to prevent damage to new feathers.

Young birds hatched in May or June grow rapidly and are fully feathered by the end of July and ready for training. The first step is to acquaint them with the jess, a short leather strap fastened to each of the bird's legs. The next stage is called “manning,” which allows the falcons to become accustomed to the presence, sounds and smell of people. Each falcon has a six-foot leash attached to a jess and is carried atop a falconer's gloved fist. In this way, the bird gradually loses the fear of moving among crowds of people. A leather hood is used when needed; when worn by the bird, it will remain calm.

Next, a long stout string called a creance is used to secure the bird. One end of the creance is fastened to the base of a portable outdoor perch or weight, and the other end is fastened to a jess, restricting the bird’s flight. The falcon is taught to hop, flutter and finally fly the length of the creance to the falconer for food. This is followed by training the bird to fly to the lure, a rectangular-shaped leather pouch to which meat is attached. The falconer whirls the lure in a circle on a 10-foot cord; the bird quickly learns to strike it in mid-air, carry it to the ground and eat the food. As the bird stoops toward the lure in free flight, the lure is jerked aside, causing the falcon to fly up, circle and make another pass. This procedure is repeated several times before the bird is allowed to strike the lure in mid-air.

When the falcon flies unhesitatingly to the lure every time, the creance is removed and the bird is permitted to fly free. Small battery-powered transmitters and a bell are attached to their legs, allowing the cadet to follow and recover the falcon if it doesn’t come to the lure as trained.

Six weeks or more are required to properly train an eyass or young falcon. When a bird is in top condition, it can fly for more than an hour and make repeated stoops. Although they can be trained to perform, falcons are never totally domesticated and remain wild creatures with strong, independent spirits.

Here's video, a few years old but shows some of our current falcons at the Academy!

Just think, we were almost the Tigers.  Doesn't quite sound as good for a school full of airpower!  For full bios on all our falcons head over to Falconry's webpage.  https://www.usafa.edu/cadet-life/clubs/falconry/

That's it for this blog entry.  Now, go outside and enjoy your Sunday.  Introduce yourself to your spouse and other family members.  Rest your eyes.

Back later on in the day, have a great day!