We stopped by Polaris Hall earlier today while CLES Fall Team Captains was in session, the Cadets participating in today’s CLES consisted of mostly Firsties, some 2nd degrees and one 3rd degree, these are the Team Captains for the Fall Semester.

The Cadet Commanders’ Leadership Enrichment Seminar (CLES) is a leadership development workshop hosted by the Air Force Academy's Department of Behavioral Sciences and Leadership (DFBL) in partnership with the Center for Character and Leadership Development (CCLD).

During the seminar, a multiple mission partner team of leadership coaches, mentors, and experts from throughout USAFA prepare 150 cadet commanders and intercollegiate team captains per year to lead change in the Cadet Wing by achieving their unit goals.  Cadets arrive to CLES with a desired goal, and then work with their cadet peers and a team of experts to evolve their goal into a specific action plan after considering issues of planning, communication, motivation, and feedback.  DFBL has hosted CLES each Fall, Spring and Summer semester since 1984 with the generous support of the United States Air Force Academy (USAFA) Association of Graduates (AOG). 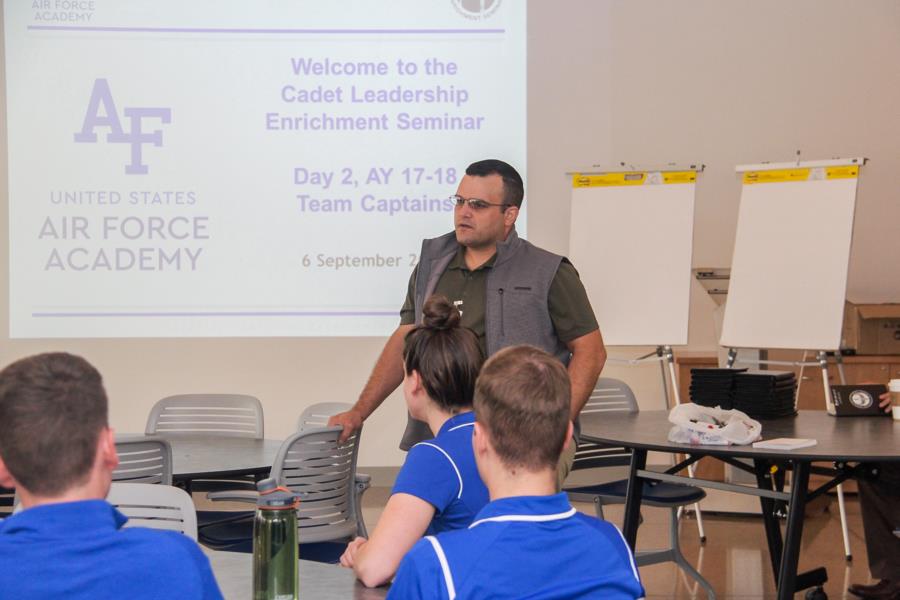 CLES has been sponsored by the AOG for the past 30 years, is an opportunity for cadet leaders to look at their leadership roles and the actions required of them to achieve excellence within their organizations.

This is the second of three times the Instructors involved with CLES will work with this team captain cohort during their time in that position, meeting again in the spring in the form of leader offsites designed to help them and their teams be more effective in every aspect of their cadet life. 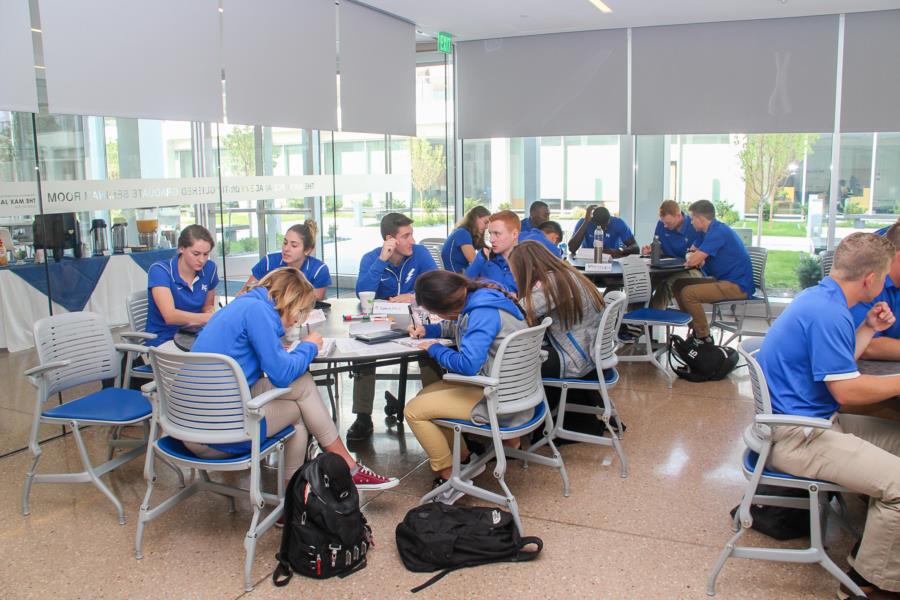 The desired outcome is to foster effective and courageous peer leadership through communication and respect in order to build more comprehensive, goal-oriented teams full of great, trusted leaders of character motivated not only to excel as athletes, but also motivated to embrace the whole person concept when they realize the positive cumulative effect of earning the respect and support of their peers across the Cadet Wing.  Ultimately, these cadet athletes will serve our nation in the profession of arms as outstanding 2nd lieutenants. 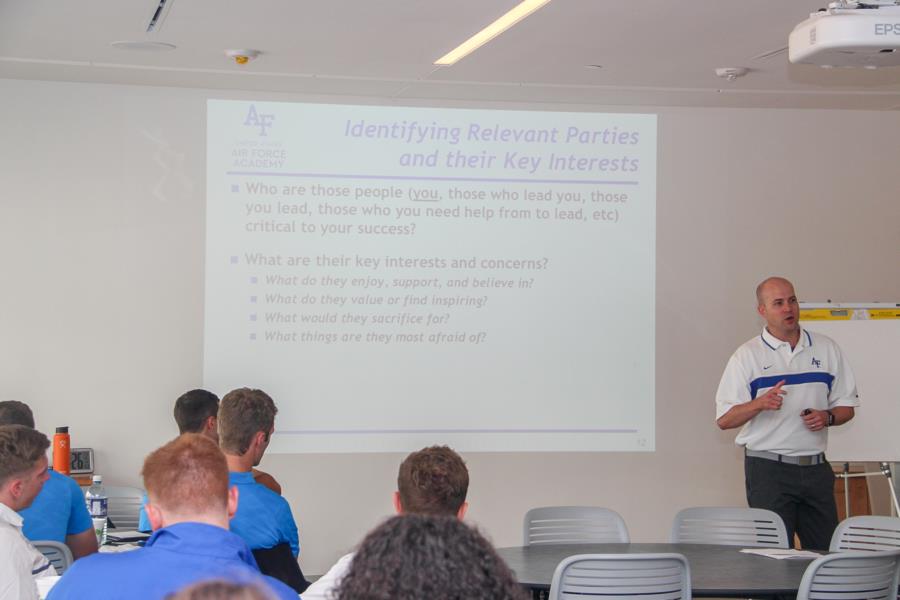 During our visit they did an exercise on communication and awareness, where they had to "arm wrestle". The rules originally given to them were the following; no communication and eyes closed. Once the first round of the exercise was complete they tallied up their scores finding out that it was possible to get 40 pts within the 5 or so seconds the exercise took place. Then it was time for round two, prior to the second round they were given a better understanding of what the rules entailed and didn't entail. After the second round, most students were able to get close to if not up to 40 pts. You'll have to ask them how they did it! 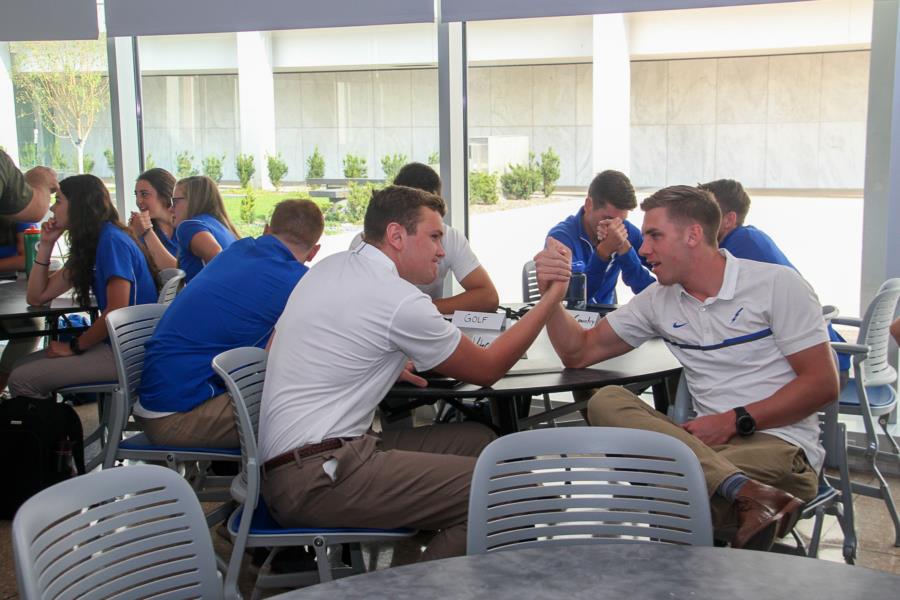 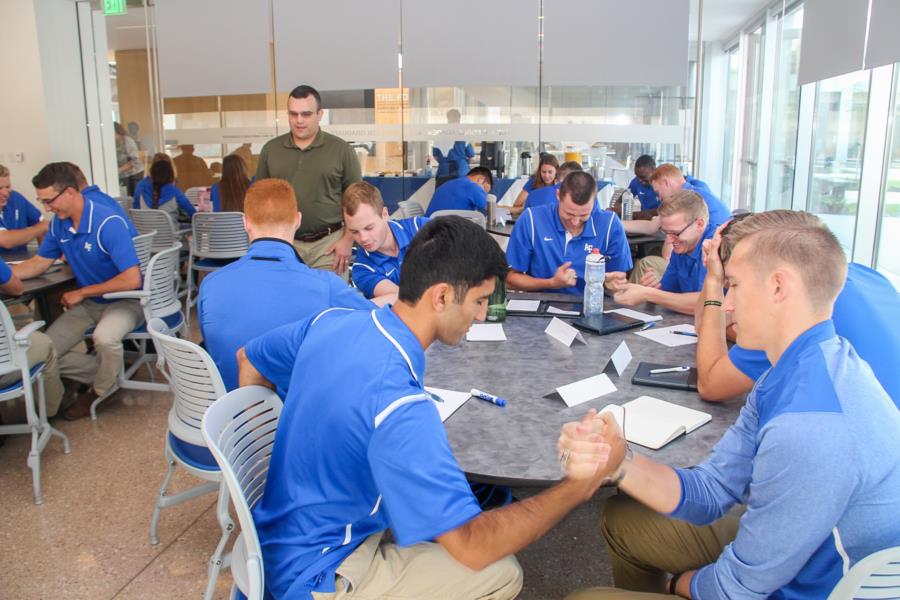 To view the rest of the pictures taken during the CLES Team Captain event go to Galleries - Military Training - Character & Leadership Development. Or click the link below.