Another day of testing, dental clinic and a few other things we cannot cover. So to keep you busy, another history lesson! We're creeping closer to days of a lot of photo coverage so do not worry. The history lessons we are sharing are what your basics are learning, the information below all comes from Contrails. Contrails is a handbook that is issued to all the new basics. They learn this information by heart so they can repeat it on demand verbatim.

The cadet’s life is centered around the nine major buildings in the cadet area. These buildings have been named after Air Force officers who were particularly vital to the history of the Air Force and the Academy. 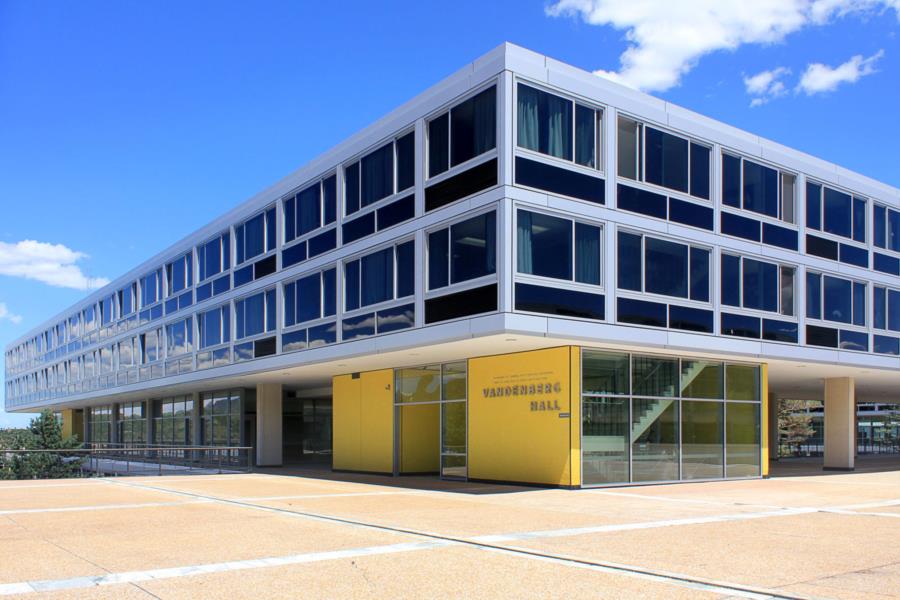 Vandenberg Hall, a cadet dormitory, contains 1,320 cadet rooms, the Cadet Store, numerous staff offices and functions, as well as various rooms for professional activities and recreational clubs. The dormitory was named after General Hoyt S. Vandenberg, the second United States Air Force Chief of Staff, who served from 1948 until 1953. His efforts  strengthened the position of the Air Force and aided in the development of today’s forces. 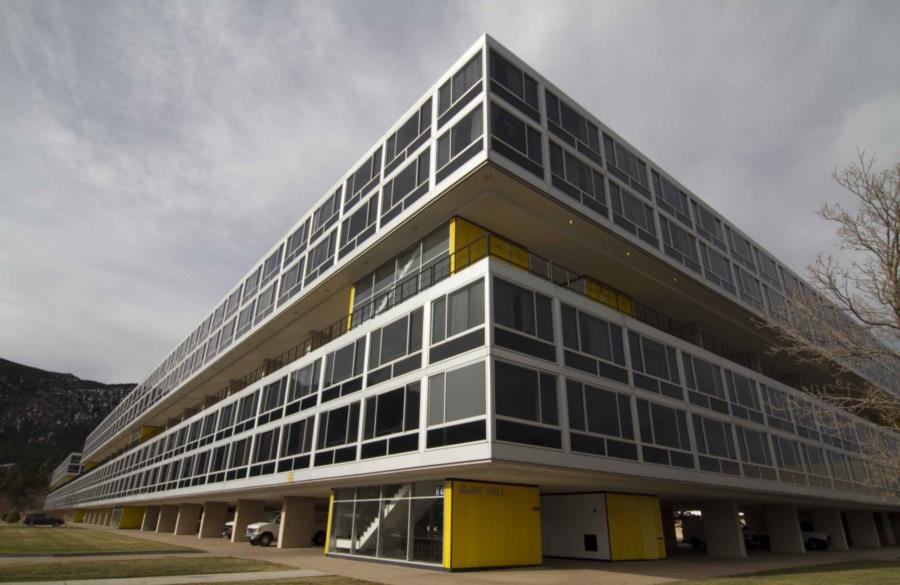 A second dormitory, Sijan Hall, was dedicated on 31 May 1976. It contains 913 cadet rooms, increasing the total number of cadet rooms to 2,233. It also contains uniform and supply facilities. Sijan Hall was dedicated and named in honor of Captain Lance P. Sijan, Class of 1965. Capt Sijan was the first Air Force Academy graduate to receive the Medal of Honor, awarded to him posthumously for heroism as a POW in North Vietnam. 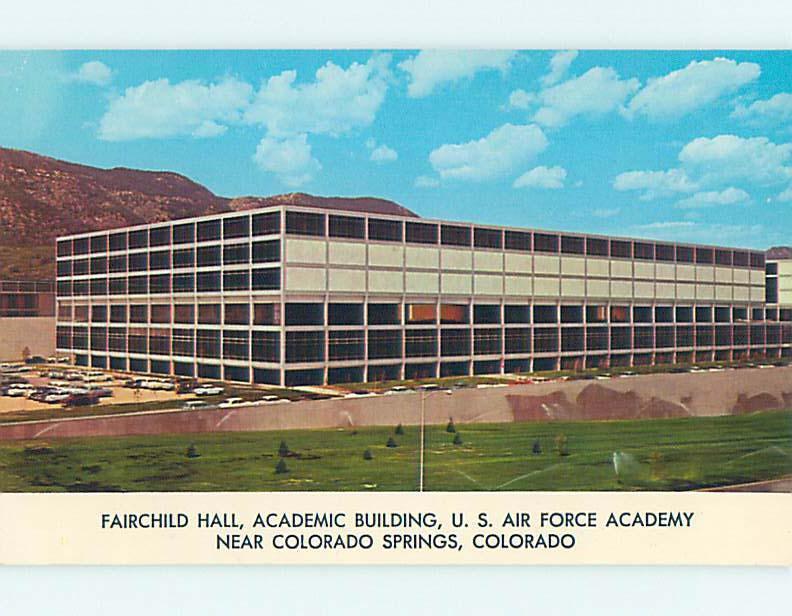 Fairchild Hall is home to advanced learning facilities from cyberwarfare to world-class experimental and computational facilities in the Aeronautics Laboratory. The academic building was named after the first commander of the Air University, General Muir S. Fairchild, who later became Vice Chief of Staff, in recognition of the fine work done by the Air University and General Fairchild on improving educational opportunities in the Air Force. The 1996 addition to Fairchild Hall, the adjacent Consolidated Education and Training Facility (CETF), houses additional laboratories, classrooms, the cadet medical clinic, and dental clinic. The McDermott Library on the north end of Fairchild Hall now has over 2.2 million items plus electronic access to over 600,000 electronic books and journals. Within the Library’s Special Collections Branch is the Clark Special Collections named for Lieutenant General A.P. Clark, the sixth Superintendent of the Academy, which serves as the repository for microfilm of historical documentation about the origin and establishment of the Air Force Academy and in the development and implementation of air power. The Branch also houses the Academy Oral History Collections, the Stalag Luft 3 archives, the Falconry collection of books and periodicals, rare books and Academy related publications. Also within the library is the Gimbel Aeronautical Library which contains an array of items pertaining to the history of flight. Five thousand year-old seals carved from semi-precious stones, 5,000 rare books dating from the 15th century, letters and manuscripts pertaining to aeronautical events, artwork, commemorative medals, periodical literature and over 3,000 prints which reflect man’s dream of flight. Additionally, Fairchild Hall houses the Commandant of Cadets and staff. 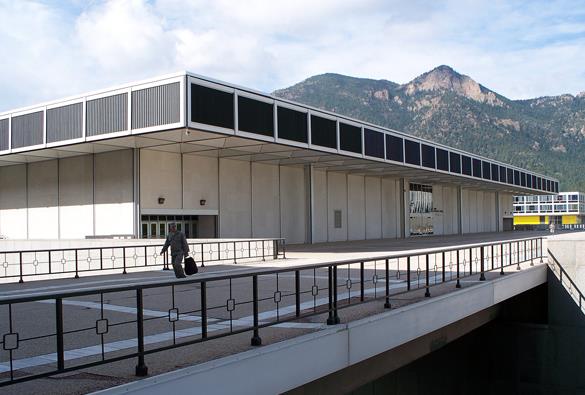 Mitchell Hall, the cadet dining hall, has facilities for serving meals to 4,400 cadets simultaneously. Mitchell Hall was named in honor of Brig General William “Billy’’ Mitchell. He was the most outspoken and farsighted American advocate of air power during World War I and the period following. He sacrificed his career for the advancement of air power.

The Cadet Chapel, the architectural highlight of the Air Force Academy with its 17-spires, was begun in 1959 and it was dedicated in September 1963. The Chapel seats 1,200 for Protestant services, 600 for Catholic services, 100 for Jewish services and 20 for Buddhist services. Additionally there are meeting spaces available for cadets of all faiths and beliefs. Around the base of the chapel, there are 10 Roll of Honor plaques honoring approximately 850 fallen graduates. 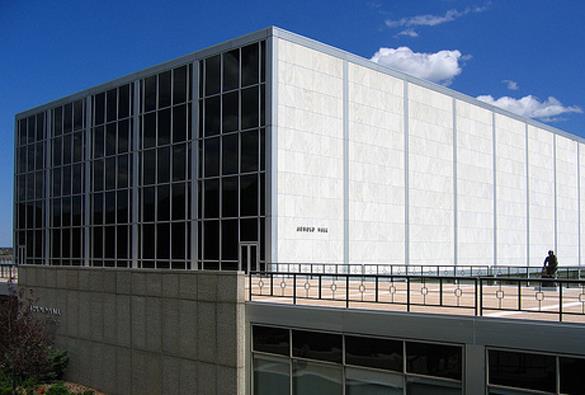 Arnold Hall (“A” Hall) was built to serve as a Student Union for cadets. It was named after the first General of the Air Force, Henry H. “Hap” Arnold, who was the Commanding General of the Army Air Forces during World War II and fought vigorously for a separate Air Force. It also houses offices and shops for elements of the Cadet Activities Flight including a Specialties Shop for purchasing gifts, Polaris Perk Coffee Shop, which “We Proudly Serve” Starbucks brand coffee products, limited menu items and specialty gifts, an AAFES food court, a theater, banquet hall and Hap’s Place for upperclass cadets. 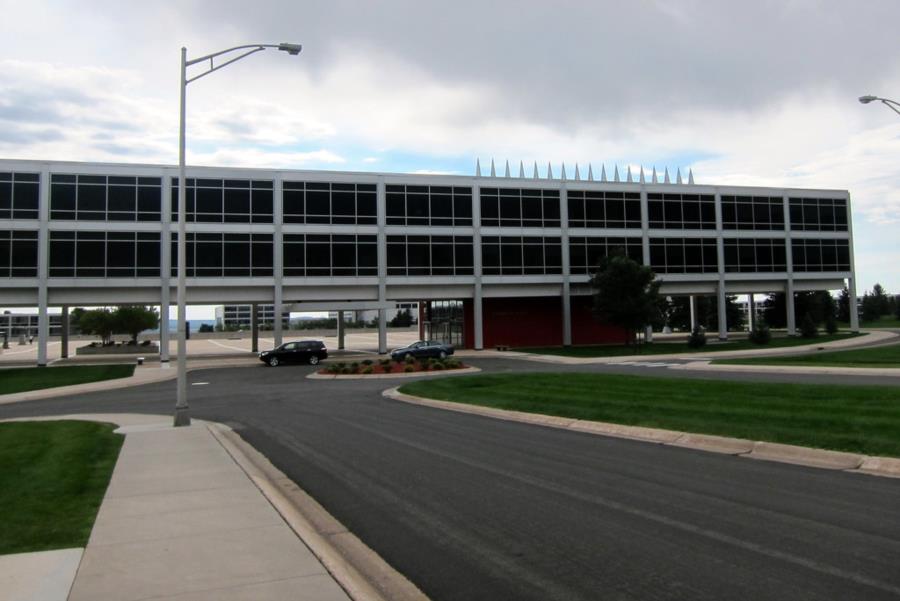 Harmon Hall, the administrative center of the Academy, houses the offices of the Superintendent and his staff. It was named in memory of Lieutenant General Hubert R. Harmon, first Superintendent of the Academy (1954 – 1956), who worked from 1949 to 1954 on plans for an Air Force Academy and who was instrumental in getting Congressional approval for the Academy.

The Cadet Gymnasium provides some of the finest facilities in the nation for physical activity. The Cadet Gymnasium, surrounded by athletic fields, contains several gyms, two swimming pools including diving section, squash, racquetball, and handball courts, and facilities for nearly every sport. Recent renovations have added a state-of-the-art fitness facility and indoor rock climbing facilities. Outside the facility is 150 acres of outdoor sports fields including football fields (one synthetic turf and two under lights), 2 rugby fields and 22 soccer fields, 30 tennis courts, six outdoor basketball courts, six handball courts, a 400m track and field facility, an intercollegiate baseball diamond with a synthetic turf infield, as well as a regulation soccer stadium.

The Cadet Field House is the center of many Academy sports and activities. The Field House is divided into three areas--an indoor track, a hockey rink with seating for 2,600 spectators, and a basketball court with seats for 6,000.

Clune Arena is named for Colonel John J. Clune, Director of Athletics from 1975 until 1991. Colonel Clune was instrumental in bringing Air Force athletic programs to the forefront of the national collegiate sports scene. 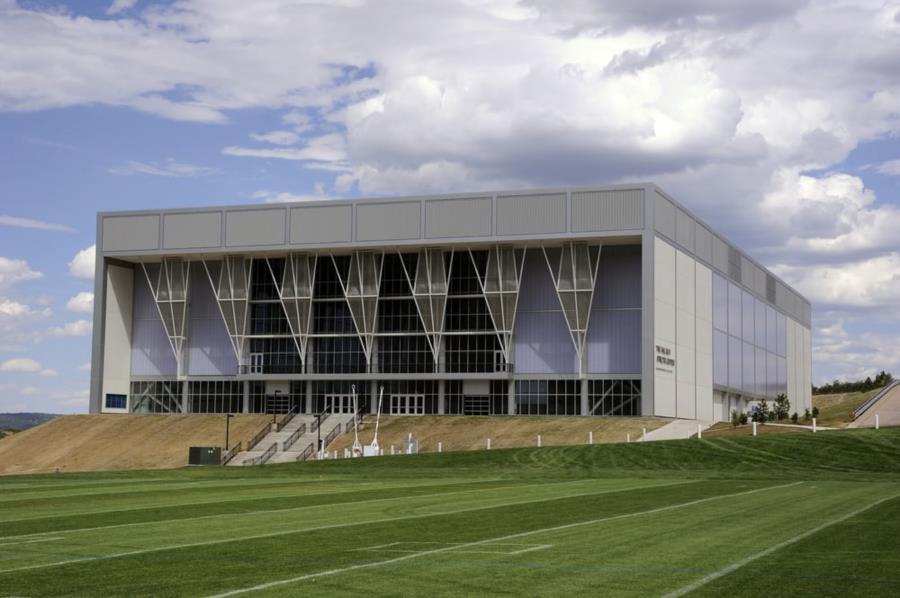 The two newest facilities in the athletic complex are the Falcon Athletic Center and the Holaday Athletic Center completed in July 2011. The Falcon Athletic Center includes offices for the Athletic Department, team meeting facilities, an advanced sports medicine facility, intercollegiate weight facilities and the AFA Sports Hall of Fame. The HAC, the largest privately funded capital project in Academy history with $5 million gifts from Bart and Lynn Holaday (Class of 1965) and the estate of Colonel Joseph and Dorothy Moller, is a 92,000 sq ft indoor regulation multi-sport field providing cadets with an all-weather sports facility. 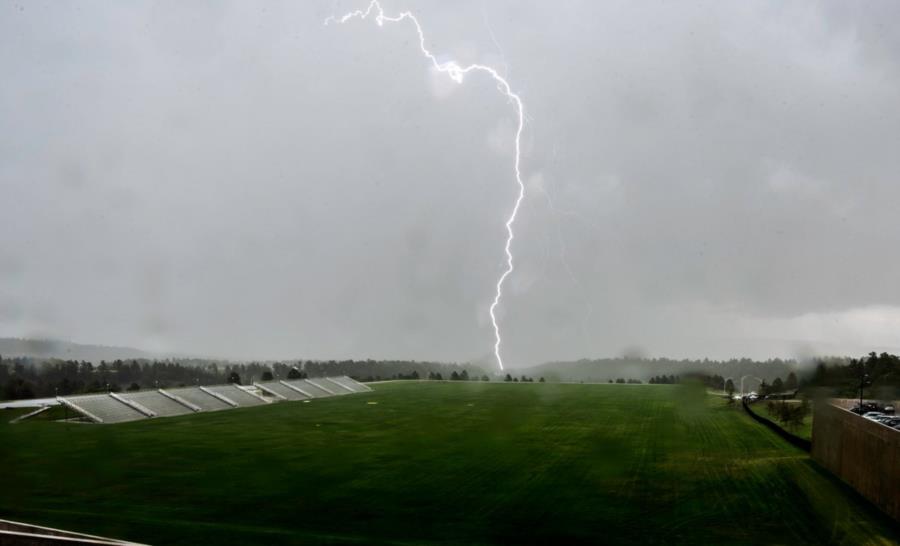 Stillman Field is the location of many cadet wing parades. It was dedicated in honor of Major General Robert M. Stillman, who served as the first Commandant of Cadets from 1954 until 1958. General Stillman is credited for creating the organization of the Cadet Wing, integrating the Cadet Honor Code into the Academy educational process, and developing Airmanship programs. 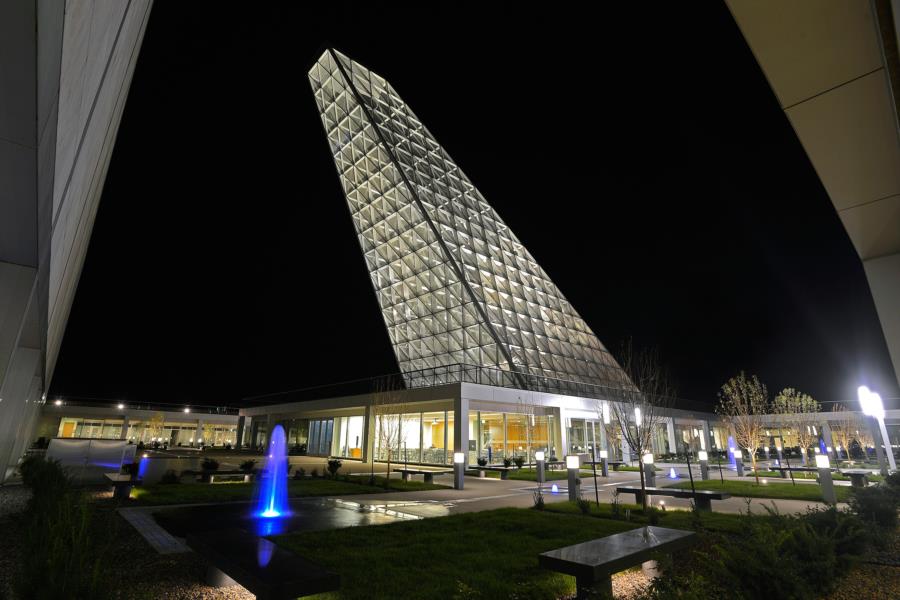 Polaris Hall: The Center for Character and Leadership Development:

In 2008 the Academy embarked on a bold initiative -- to construct an architecturally iconic symbol of our AF commitment to character and leadership development. Polaris -- the North Star -- has long been a navigation tool to guide the traveler. The alignment of the Skylight Tower on the new Center building with Polaris sends a powerful message to all that leadership and character development are paramount in all we do. Architecturally, this is our moral compass. This is the newest building and not named after a person.

We will be back tomorrow with another history lesson for you!

The answer to yesterday's trivia was False. Brigadier General McDermott was not the first Dean of the Faculty but the second, starting in 1959!