The Retreat Ceremony serves a twofold purpose. The Retreat Ceremony is a time honored tradition that signifies the end of the official duty day and serves as a ceremony for paying respect to the flag. The American Flag is lowered and folded while the National Anthem plays. The lowering of the flag is coordinated with the playing of the National Anthem so the two are completed at the same time. 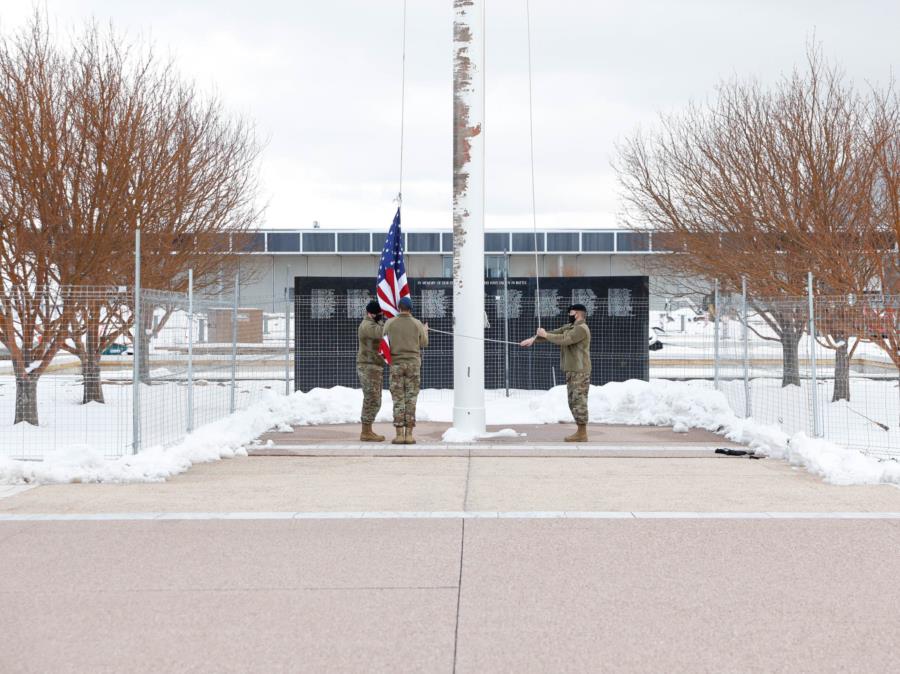 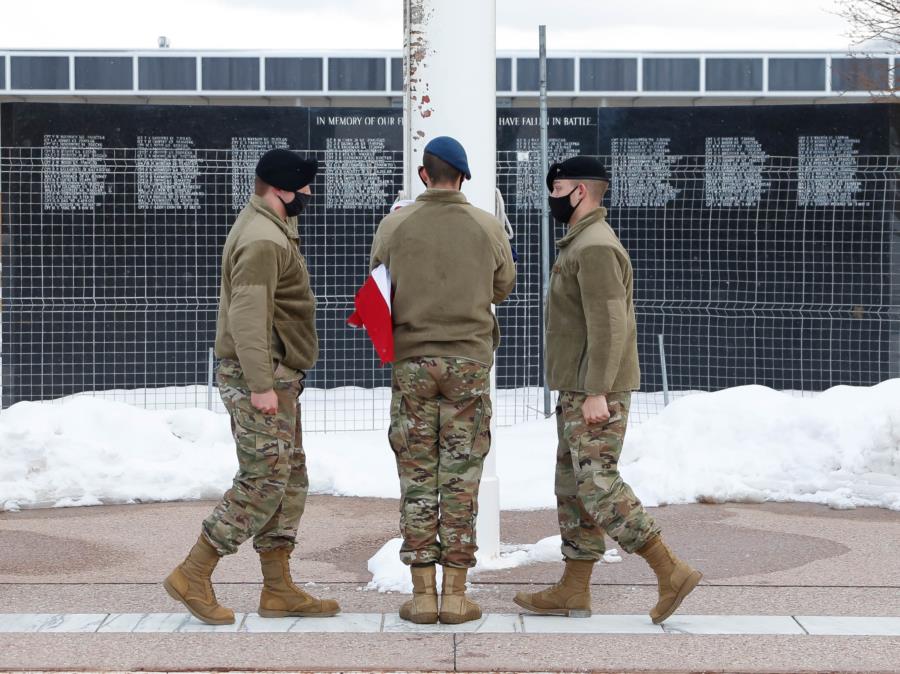 The Flag is then detached from the halyards and folded. The traditional method of folding the flag is as follows:

Straighten out the flag to full length and fold lengthwise once. Fold it lengthwise a second time to meet the open edge, making sure that the union of stars on the blue field remains outward in full view. 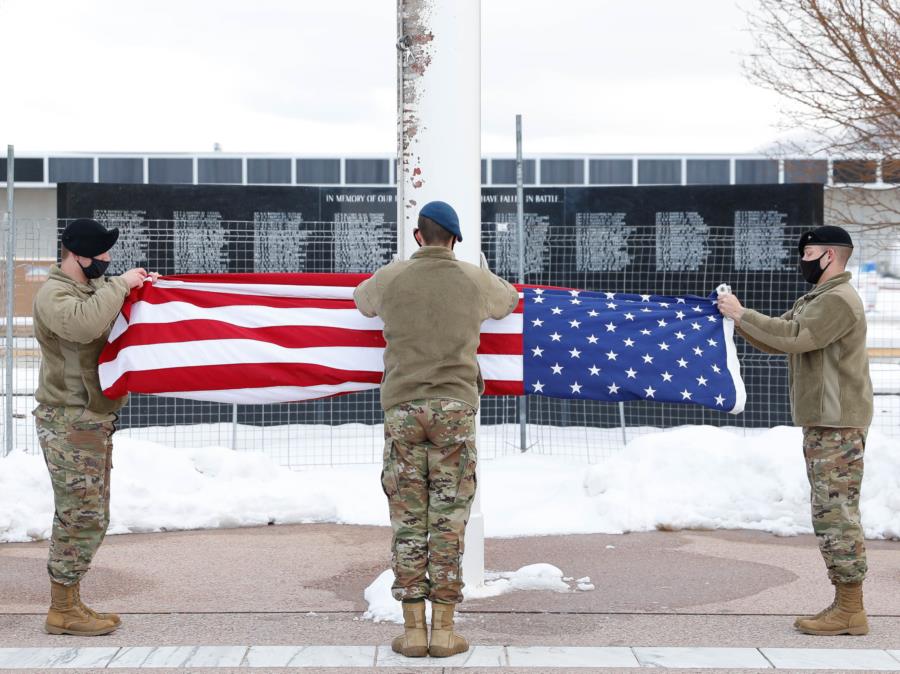 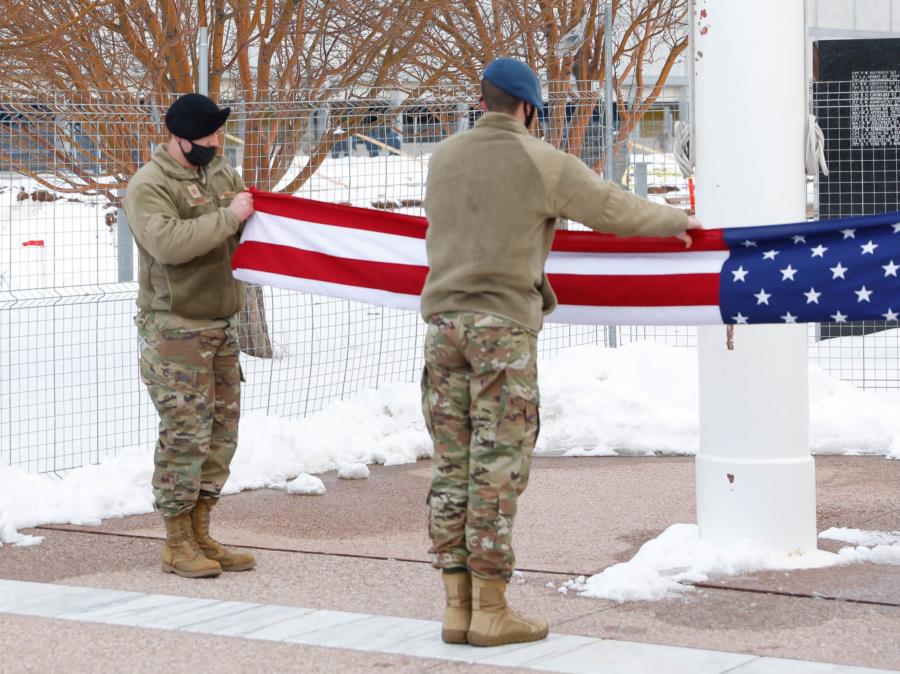 A triangular fold is then started by bringing the striped corner of the folded edge to the open edge. The outer point is then turned inward, parallel with the open edge, to form a second triangle. The diagonal or triangular folding is continued toward the blue union until the end is reached, with only the blue showing and the form being that of a cocked (three-corner) hat. 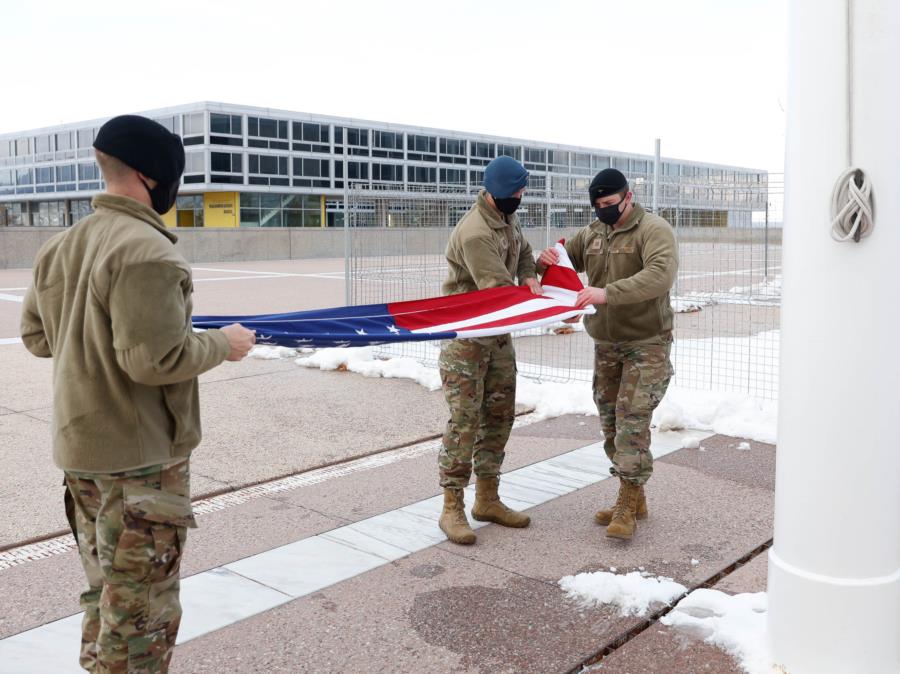 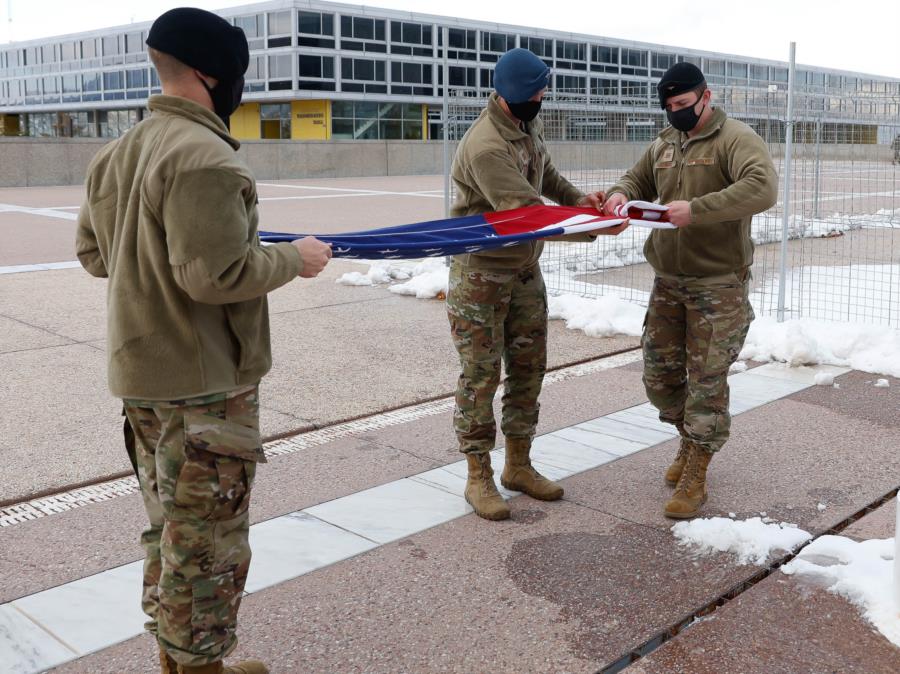 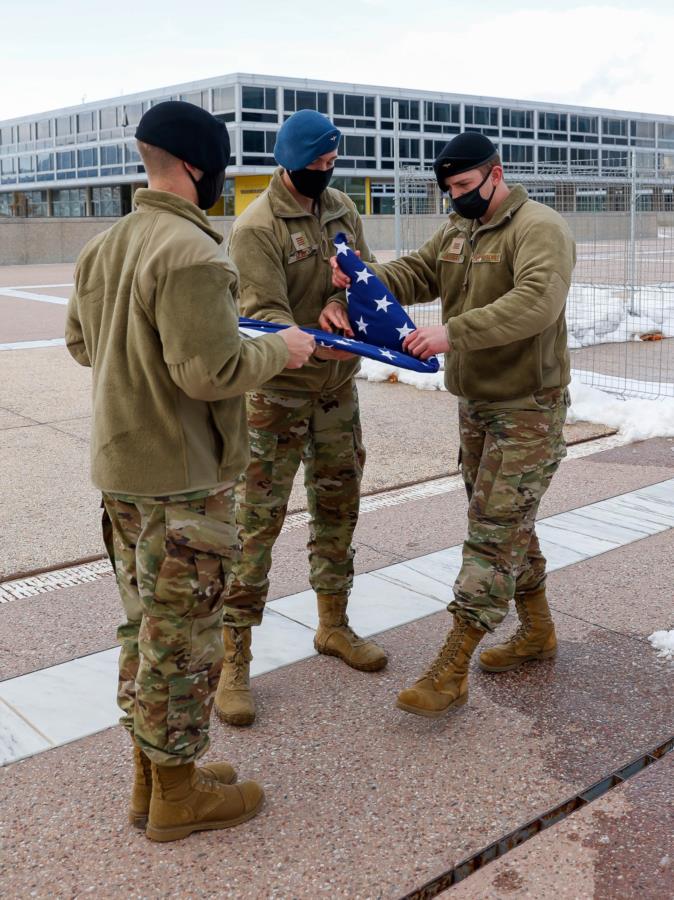 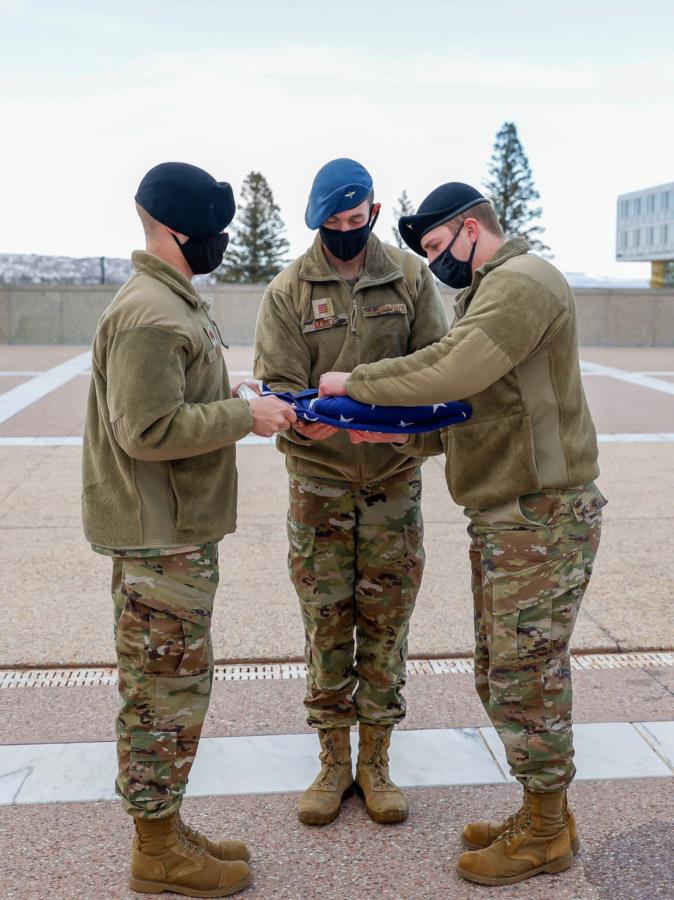 The flag-folding ceremony represents the same religious principles on which our great country was originally founded.

The portion of the flag denoting honor is the canton of blue containing the stars representing states our veterans served in uniform. The canton field of blue dresses from left to right and is inverted only when draped as a pall on the casket of a veteran who has served our country honorably in uniform.

In the U.S. Armed Forces, at the ceremony of retreat, the flag is lowered, folded in a triangle fold and kept under watch throughout the night as a tribute to our nation’s honored dead. The next morning it is brought out and, at the ceremony of reveille, run aloft as a symbol of our belief in the resurrection of the body.

Symbols for the Folds of the Flag

The first fold of our flag is a symbol of life.

The second fold is a symbol of our belief in eternal life.

The third fold is made in honor and remembrance of the veteran departing our ranks, and who gave a portion of his or her life for the defense of our country to attain peace throughout the world.

The fourth fold represents our weaker nature; as American citizens trusting in God, it is to Him we turn in times of peace, as well as in times of war, for His divine guidance.

The fifth fold is a tribute to our country, for in the words of Stephen Decatur, “Our country, in dealing with other countries, may she always be right, but it is still our country, right or wrong.”

The sixth fold is for where our hearts lie. It is with our heart that we pledge allegiance to the flag of the United States of America, and to the republic for which it stands, one nation under God, indivisible, with liberty and justice for all.

The seventh fold is a tribute to our armed forces, for it is through the armed forces that we protect our country and our flag against all enemies, whether they be found within or without the boundaries of our republic.

The eighth fold is a tribute to the one who entered into the valley of the shadow of death, that we might see the light of day, and to honor our mother, for whom it flies on Mother’s Day.

The ninth fold is a tribute to womanhood, for it has been through their faith, love, loyalty and devotion that the character of the men and women who have made this country great have been molded.

The 10th fold is a tribute to father, for he, too, has given his sons and daughters for the defense of our country since he or she was first born.

The 11th fold, in the eyes of Hebrew citizens, represents the lower portion of the seal of King David and King Solomon and glorifies, in their eyes, the God of Abraham, Isaac and Jacob.

The 12th fold, in the eyes of a Christian citizen, represents an emblem of eternity and glorifies, in their eyes, God the Father, the Son and Holy Ghost.

When the flag is completely folded, the stars are uppermost, reminding us of our national motto, “In God We Trust.” 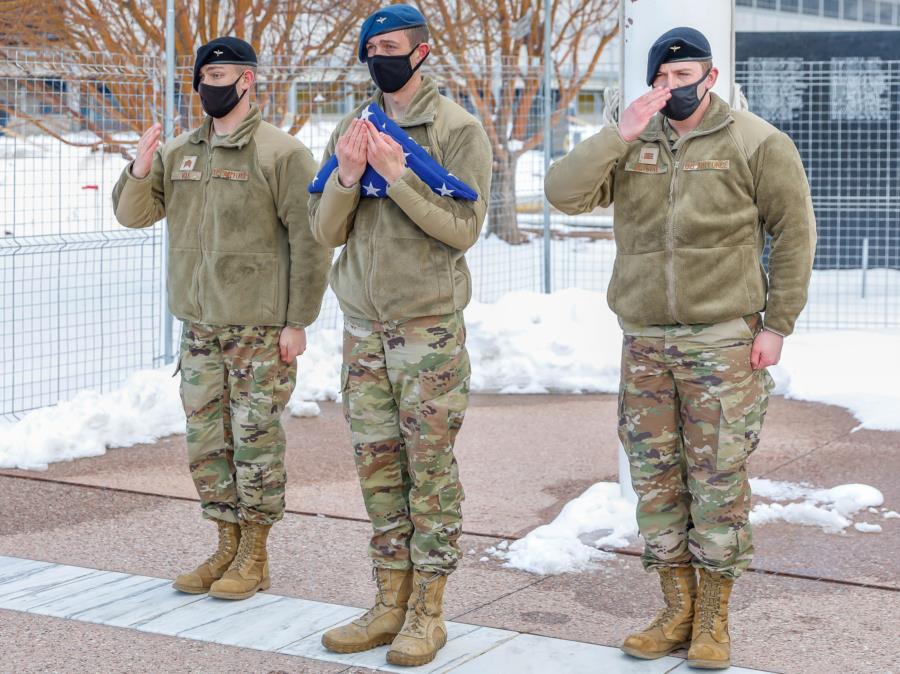 After the flag is completely folded and tucked in, it has the appearance of a cocked hat, ever reminding us of the soldiers who served under Gen. George Washington and the sailors and Marines who served under Capt. John Paul Jones and were followed by their comrades and shipmates in the U.S. Armed Forces, preserving for us the rights, privileges and freedoms we enjoy today. 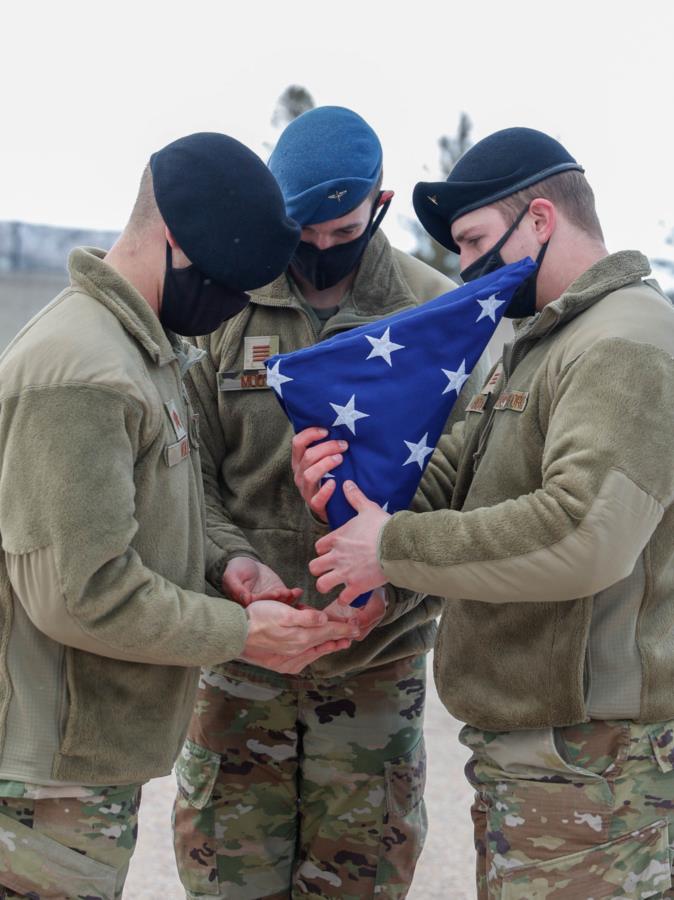 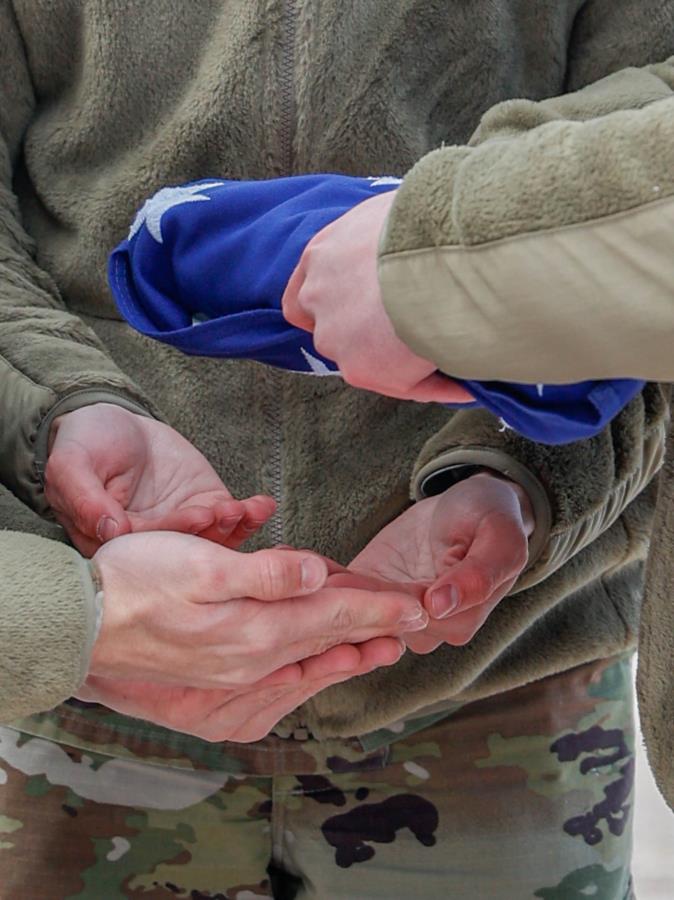 The source and the date of origin of this Flag Folding Procedure is unknown, however some sources attribute it to the Gold Star Mothers of America while others to an Air Force chaplain stationed at the United States Air Force Academy. Others consider it to be an urban legend. It is provided as a patriotic service to all.

There was also a Key Squadron Personnel Parade practice being conducted before the Retreat Ceremony. 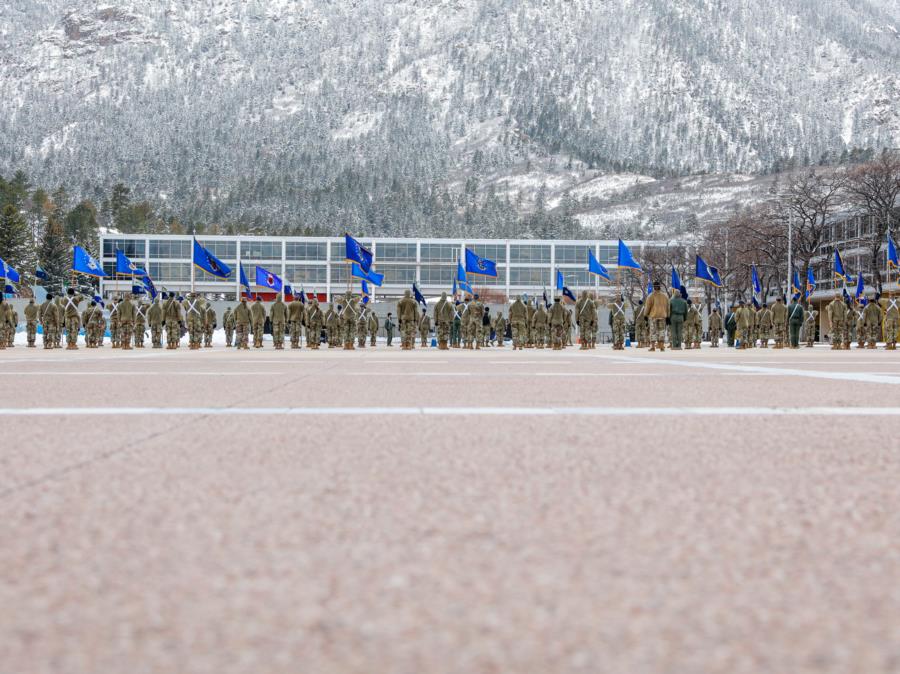 The Key Squadron Personnel consists of the  Squadron Commander, Guide on Bearer and Color Bearers. The purpose of a parade is to honor national symbols or individuals on special occasions. It is a display of proficiency and a state of training. Parade contributes to public morale, teamwork, and pride in the organization – displaying strength and unity of our nation. 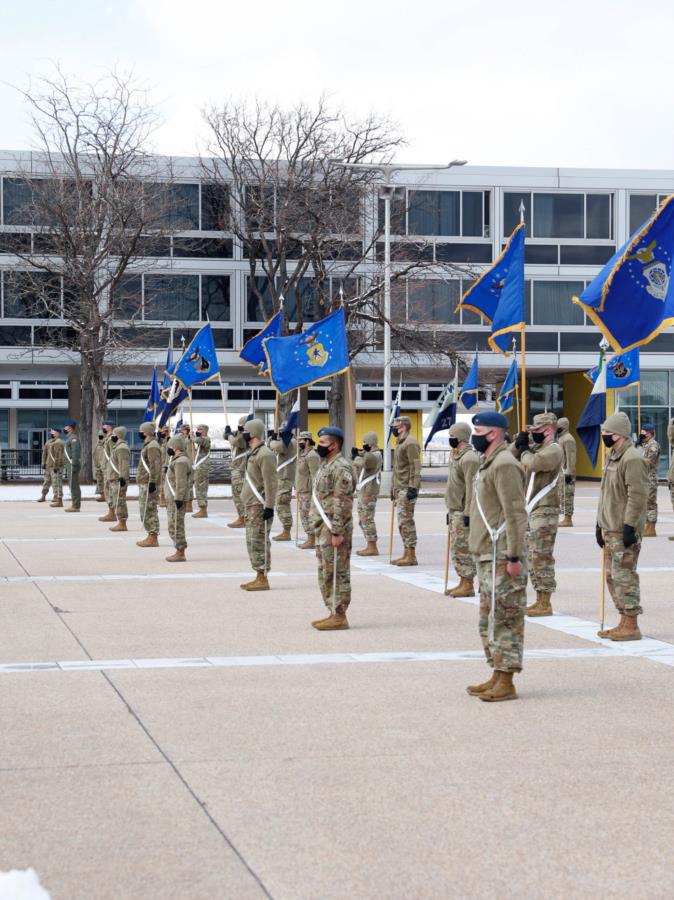 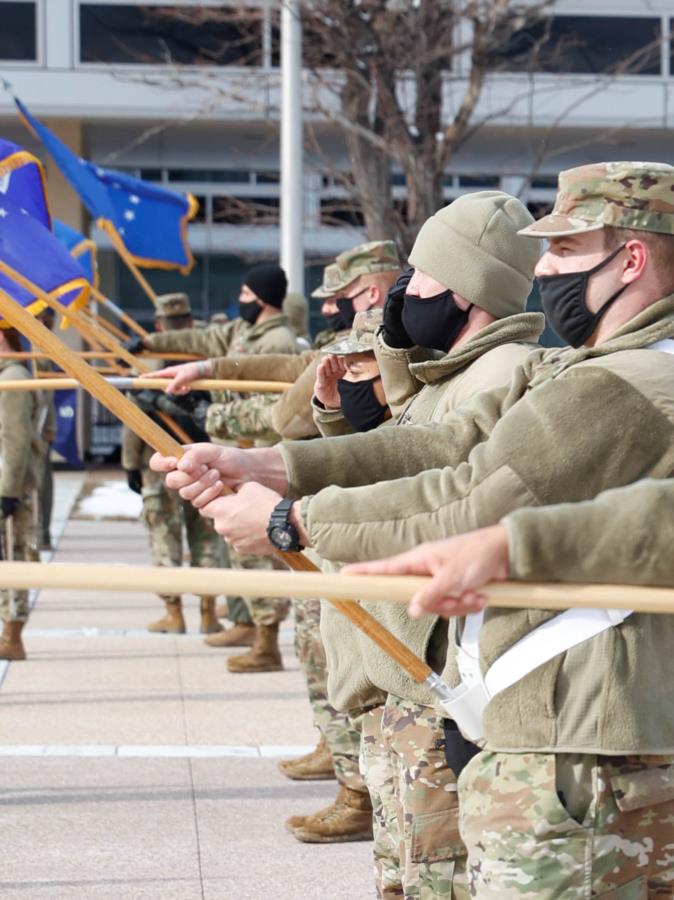 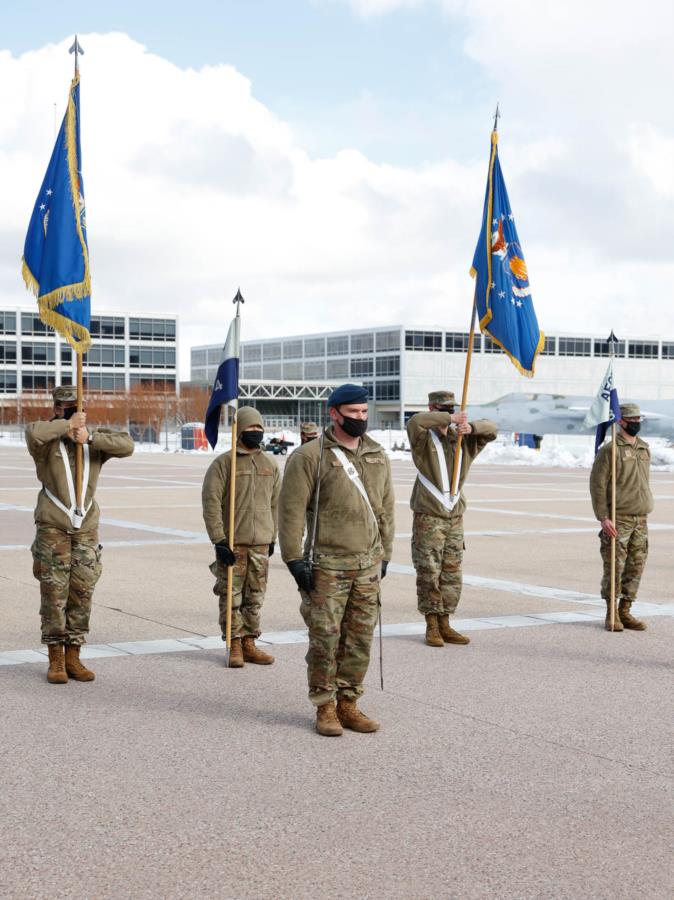 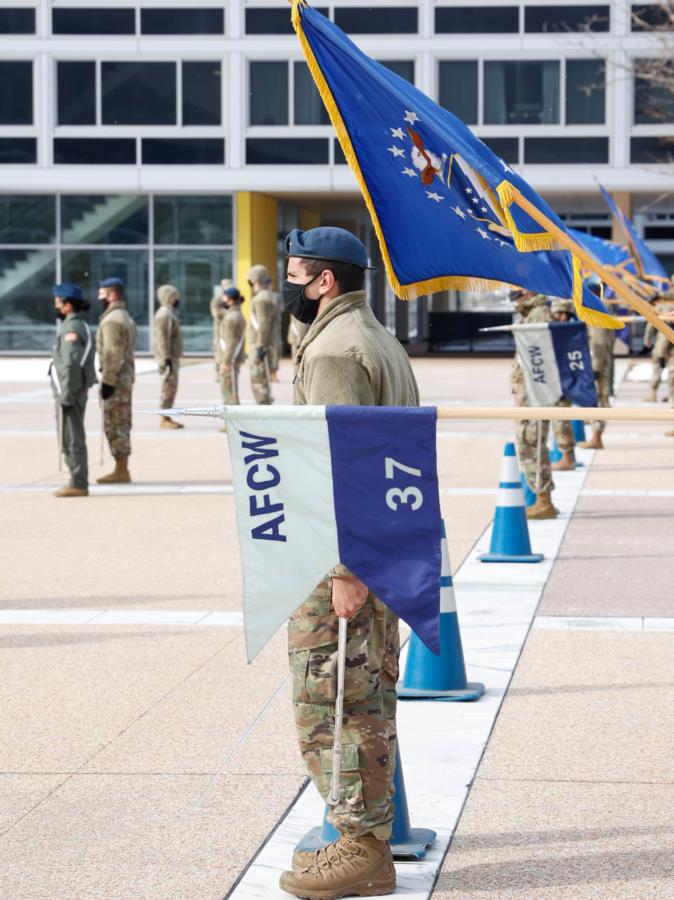 To view photos from the Retreat Ceremony and Key Personnel Parade practice, go to Galleries > Military Training.  Set photo order Oldest to Newest.  Select your start page number. Or click on the link below.